Considering its retiring position, this building has had quite an eventful history. The date over the main door confirms that it was built in 1752, but as a Congregational Chapel. A minister, Mr Perry of Lavendon, was appointed in 1788 and he served until his death in 1793. During his ministry the Chapel was rebuilt to make room for a burgeoning congregation – including on occasion members of the Anglican Church, when they had no vicar of their own. By 1851 the chapel welcomed nearly 600 people to its three Sunday services but disagreements with the trustees in the 1860s led to reduced congregations. The last minister to the Chapel, George Hall, was said to have “preached to the pues sometimes” so perhaps discouragement was in part the cause of his death in January 1878. He is buried in Carlton, Bedfordshire. The chapel was closed in the 1880s and now a couple of gravestones on the lower slopes of Beacon Hill are all that remains of over a century of Congregational worship. The graveyard itself had now been reclaimed and converted to a garden area.

The Salvation Army were the next tenants, and held frequent services there for the next thirty years or so. After the 1914 –18 war the building served as a meeting place for demobbed soldiers and sailors and was “well patronised by many who served under the colours” until the mid 1940s. It was later used for gymnastic training and briefly as a boxing club, while the annexe became a local photographer’s studio and darkroom. In 1952 the inaugural meeting of the Wilaveston Players was held there, and for the next fifteen years it became the group’s rehearsal room. 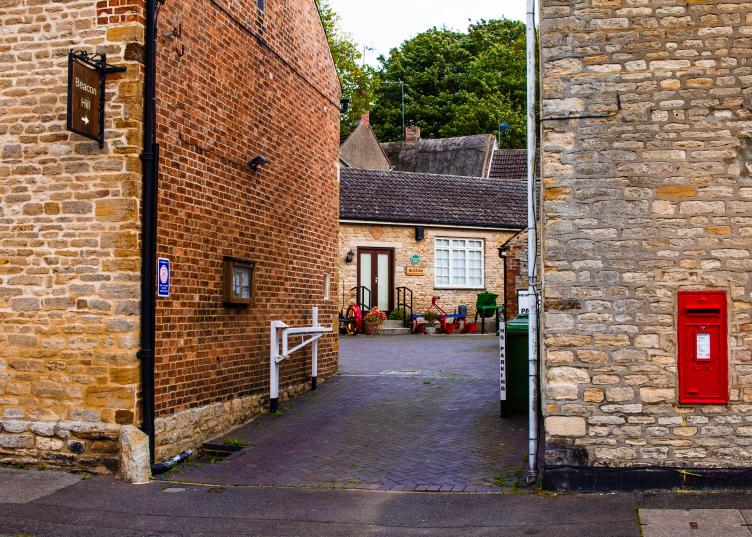 After a period of neglect, the building was bought in 1969 by the double G Trading Company for use as a warehouse. Did squatters use the building at this time, and were they evicted when the building was refitted in 1971? Perhaps this was just a rumour, but certainly the chapel was seen to be on fire one September afternoon in that year. Two fire tenders came from Wellingborough, but the building was gutted, although nearby thatched cottages were saved.

In 1976, with considerable financial help from local companies, the burnt out shell was bought by the Wollaston Society for conversion into a museum. Since 1970 the Society members had been collecting records and artefacts relating to Wollaston’s past – helped by the generosity of many residents – and their desire to see these records properly housed, led to the marathon task of rebuilding, re-wiring and refurbishing the chapel. Apart from the walls, the only recognizable feature remaining was the ornamental grill, which covered the ventilator shaft, and this can now be seen on the museum’s outer wall next to the entrance door. Much of the work was done free of charge by local people, the display cabinets came from Corby and London, the overhead lighting panels had started life in a Lyons Corner House.

The new museum was opened in November 1979 by Mr Ray Griggs. Since then the number of items held by the Society (now the Wollaston Heritage Society) had almost trebled, and we are indebted to the many residents, past and present, who still bring mementoes, photographs and family records for display and safe keeping.