Wollaston Street names and their origins

The following information originated from research by the late Mike Hollowell and has been added to by Heritage Society members..

Abbey Court - Named after Delapre Abbey, who owned The Priory and the land where the roads were built

Backway The track running parallel with Irchester Road, that connects The Gap with College Street.

Bell End - After the Bell Inn that stood on the corner of High Street (now a private dwelling called the Old Bell).

Bramley Court - After the apple orchard on which it was built.

Briarwood Way - Over the years, the allotments on which this road was built became very overgrown and a great place to pick blackberries.

Church Lane - The lane leading up to St Mary's Church

Church View - St Mary's Church can be seen from here

Cobbs Lane - After Edmund Cobbe who became vicar of the Parish in 1663.

College Street - Formerly called Back Way but changed in around 1897 when the village State School was built.  The name Backway has since been used for the track, running parallel with Irchester Road, that connects The Gap with College Street.

Dando Close - Named after Mr Dando, manager of the Co-op, Parish Councillor and a man very active in village life in the 1940s/1950s.

Duck End - A low lying area of the village with many springs coming out of the surrounding higher ground.  The site of of the mediaeval fish ponds for the Bury Manor.

Eastfield Road - Built on the nearest fields east of the village.

Feast Field Close - Built on the feld where, at the village Feast, the fair people set up their stalls and, at other times, visiting circuses erected their tents.  It was always known locally as 'the Feast Field'.

Fellows Close - Built on land owned by the Oddfellows.

Francis Dickins Close - Named after the Squire who had the fields 'enclosed' in 1787-1789.  He was also Member of Parliament in the County for 16 years.

Grendon Road - The road to Grendon 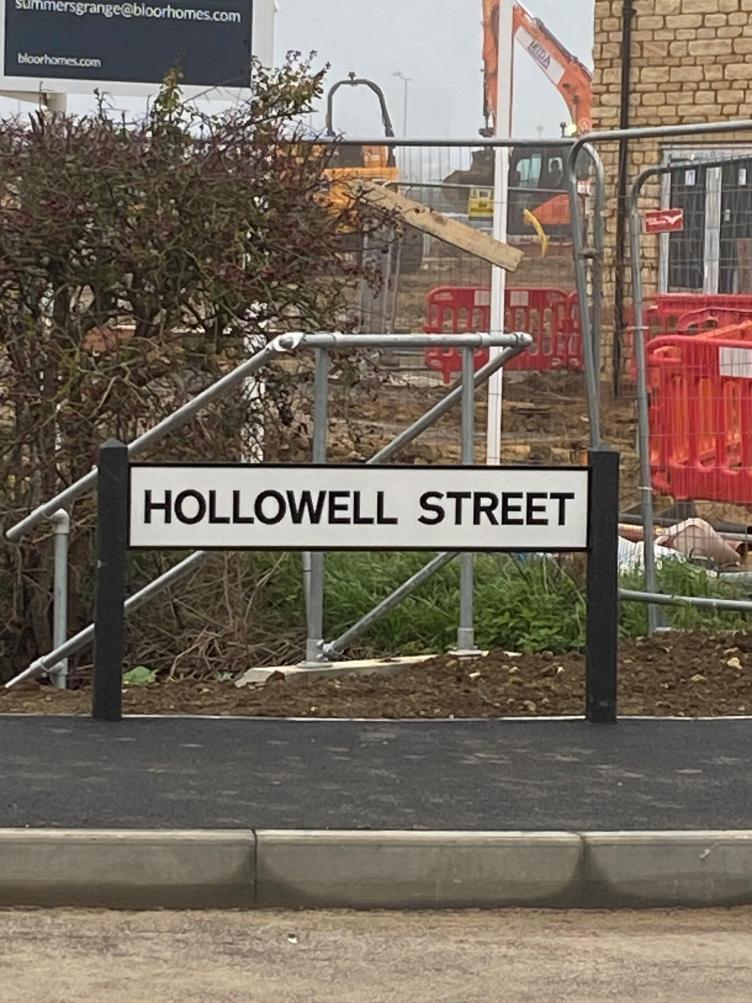 Hazelden Close - Named after James Hazelden who, in 1732, left money to buy bread for the poor.  Bread was distributed until 1948 after which time the money was invested and the interest distributed annually.  The Bread Charities, after 300 years, were would up in 1995.

Hickmire - Not known, but possibly because it was a muddy lane.

Hookhams Path - named after the field that it ran alongside.

Howards Court - Named after the owner of the land, which was where his carpentry shop stood.  His name was Howard Brown but he was known locally as Jim Brown.  It was named by his widow after he died.

Irchester Road - The road to Irchester,  It dates back to the Enclosures in 1789.

Lancaster Close - Presumably, a reference to the Duchy of Lancaster who are local landowners

Little Lane - Not known, but possibly because it was a little, very narrow, lane.

London Road - The road to London.  The two ends were known as Strixton End (because it was near Strixton) and Partridges's Hill at the other (as the landlord of the Marquis of Granby was Mr Partridge).

Monks Road - After Delapre Abbey, who owned The Priory and the land where the roads were built.

Neale Close - Named after Thomas Neale and Charles Neale, who in 1675 and 1719 respectively, left money to buy bread for the poor (also see Hazelden Close).

Orchard Close - Named after an orchard on the allotments where the road was built.

Park Street - An extension of The Gap, which was previously called Park Street (see The Gap).

Pearson's Mews - Built on the site of Tom Pearson's Cycle Shop and, later, his filling station and garage.

Priory Road - After Delapre Abbey, who owned The Priory and the land on which the roads were built.

Prospect Close - The Close is next to Prospect House and probably built on its grounds.

Queens Road - Named as a patriotic gesture to Queen Victoria.

Red Hill Crescent - Built on Red Hill (an ancient name).  The land at this end of the village is heavy with iron ore and when ploughed, glows a rich, dark red in the evening sun.

Roses Close - Built on land owned by The Oddfellows.  Apparently named after a local man, an early Secretary of the Society.  Possibly Thomas Rose.

Rotten Row - Not known.  Possibilities are a corruption of the French for King's Road, or of rotteran (to muster), or Ratten Row (roundabout way), or rotten (the soft material with which the road was covered.  Take your pick!

Shelton Court - Built on land where the Shelton family owned a Shoe Factory.

Shepherds Hill - Not known, but likely to be where flocks of sheep were kept.

South Street - A mystery, as when named it was the most easterly street in the village and runs north to south.

St Albans Place - Named after a row of Victorian terraced houses that stood on the site previously.

St Mary's Road - named after the Patron Saint of the Parish Church.

St Michaels Lane - The place where the Michaelmas fair was held in mediaeval times.

Stone Close - Built very close to, if not on the site of, a stone quarry. 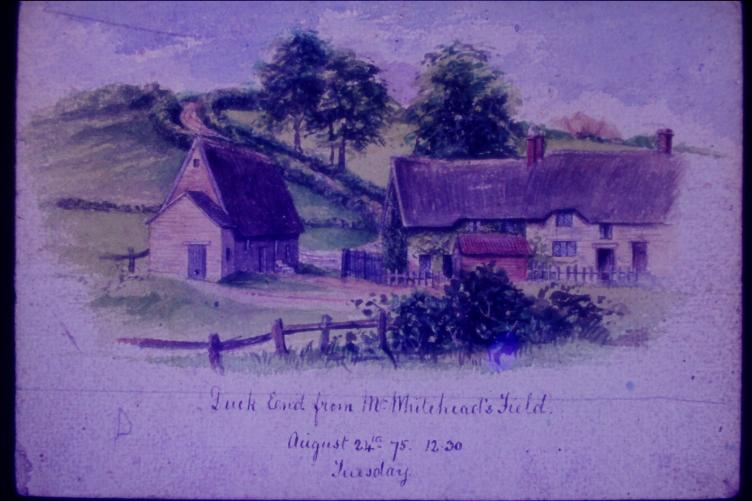 The Cradle - The triangle at the conjunction of London Road and Hinwick Road.  Also known as The Square.

The Gannick - The steps connecting High Street and College Street

The Gap - Formerly named Park Street because at its northern end it overlooked Wollaston Park.  In the late 1990s its name was changed because emergency vehicles could not get through the gap in the hedge which divided the two parts of the street.  Prior to the name change, to find out which end of the road someone lived, you would ask 'Do you live through the gap?  So, the residents of that end of the road decided that that should be the new name.

The Grove - Named to help market the properties but was previously the garden of a detached property.

The Heathers - Named to help market the properties.  The developers planted all of the landscaping and flower beds with heathers.

The Square - The triangle at the conjunction of London Road and Hinwick Road.  Also known as The Cradle.

Thrift Street - This was the first street in the village to be built by the Co-operative Society and named as such because co-operatives were all about saving money. 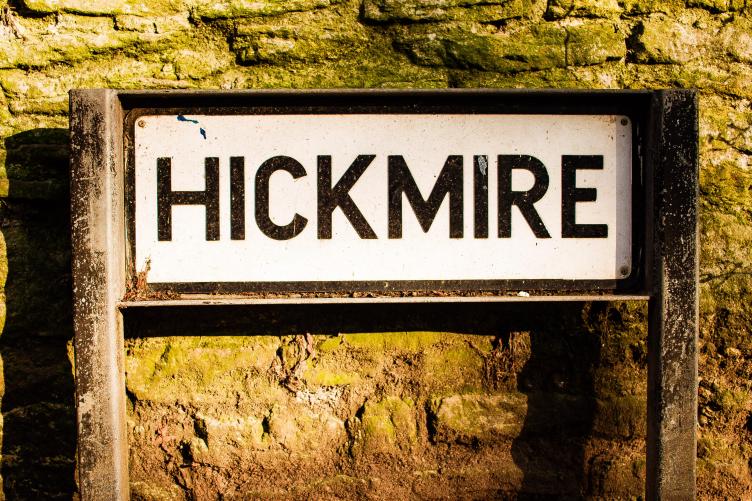 No definitive explanation has yet been unearthed for the following names.  Wollaston Heritage Society would welcome any further information on this subject.

Hickmire (a possible explanation is given above)

Lancaster Close (a possible explanation is given above)

Rotten Row (possible explanations are given above)

Shepherds Hill (a possible explanation is given above)

The following streets have disappeared from the village map, mostly demolished in the 1960s.